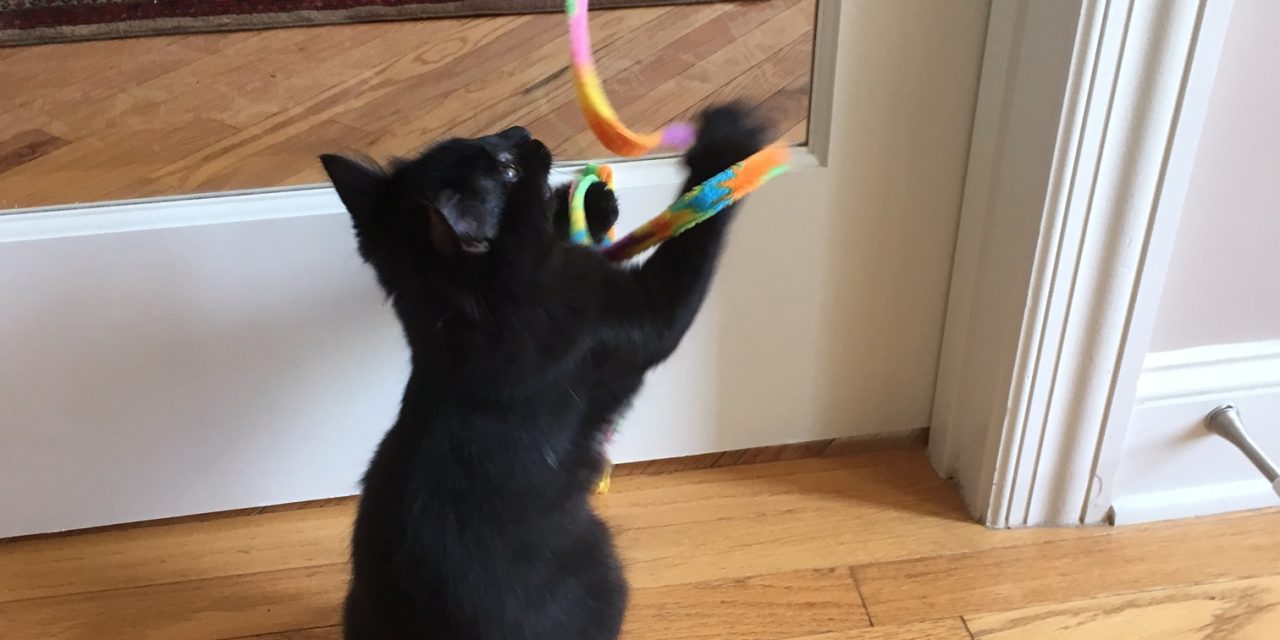 It was Saturday afternoon two weeks ago and Cindy and I had headed to the PetSmart in Huntsville to buy a large bag of the Pro-Plan dog food that Missy loves. We’d been at the house for over a month and she was running out the food we had brought with us from the boat. No big deal…we have gone to this PetSmart numerous times and I knew exactly which aisle the dog food was on.

So, I was pushing the cart and preparing to turn into the appropriate aisle when I noticed Cindy was continuing down the main aisle. This is a bit strange, since she knows where the dog food is just as well as I do. I was about to say something to her when I saw what had her distracted…

The local Spay/Neuter Action Project apparently brings their cats to PetSmart every Saturday for folks to fall in love with and adopt. Cindy and I are both natural born cat people; we’ve had several in our life together as well as individually before we met. We re-homed our two fur babies when we moved onto the boat fulltime because we thought the Caribbean weather would be too hot for them, especially Cosmo, our bushy 18-pound Maine Coon snow cat. The thought of all that cat hair clogging the bilge pumps, as well as dealing with litter had us concerned too. We have since found that many cruisers keep cats on board and that there are methods for dealing with litter and hair issues. Cindy found a Facebook group called Gatos del Mar (Cats of the Sea) and had regularly cooed over the photos people posted of their adorable felines. Not having a cat was particularly tough for her; she had a black longhaired male named Scooter that shared her life for almost 20 years and she missed him terribly (he WAS a great cat!) As a result, we had been looking at pet adoption sites and going back and forth on whether we wanted to add a kitty to our crew.

We had settled on “no” until that fateful afternoon.

Cindy’s focus quickly settled on an adorable 10-week old black kitten that was a dead ringer for Scooter. He and his 2 brothers and their momma had been left in a dumpster (who DOES this?!) and were found by a SNAP volunteer. One of the SNAP ladies asked if we wanted to get him out of his carrier to meet him one-on-one; we said yes, knowing that once we held him it would be all over…and it was. Even if we had decided to “think about it overnight”, we knew we’d just have to track him down the next day. Jack Playing With His Favorite Toy

We brought our new baby home and introduced him to Missy. So far, they’re getting along fairly well while they are getting used to each other. The only issues we have had have been during Missy’s feeding time. Missy has always been food-aggressive (that little dog will pimp-slap a Doberman if any food is out) and she tries to drive the kitten away if he’s close by during feeding time. We solved this by separating them when Missy is being fed. Once she has finished her food and we’ve taken her bowl up, she’s fine.

We kicked around a few names before settling on Jack… short for Captain Jack Sparrow. We’ve usually gone for 2-syllable pet names in the past but Jack just seemed to fit him and it lends itself to being pronounced emphatically, as in “Jack!”.

Jack is a typical kitten, keen to explore his new world both at the house and on the boat (as I write this, Jack is laying in one of Missy’s favorite spots by one of the hatches, sound asleep on his back). He tears around batting his toys as well as whatever else isn’t nailed down off any flat surface, stealing bulbs of garlic from my galley and chewing up anything he can get his paws on. Cindy and I are sporting a nice collection of scratches and punctures from playing with our rambunctious new baby. Playtime can go from cute and adorable to painful and bloody in a heartbeat! Safe in His Momma’s Arms

We addressed the kitty litter tracking issue by switching to a new cat box system called Breeze. It replaces the traditional litter with ceramic pellets that don’t stick to the cat’s paws. Pee drains through the pellets to an absorbent pee pad that needs to be changed out once a week. A few pellets are lost each time you clean poop out of the box but we figure 3 or 4 7lb bags of the ceramic pellets will be enough to last us a year and they are not very expensive.

We haven’t had any cat box odor issues since we started using the Breeze system. It only took a few days to transition Jack over to the pellets, though this may be due in part to starting Jack on them at such a young age. An older cat that has grown used to traditional litter may have a harder time making the transition. We’re dealing with the hair issue by brushing him every couple of days. So far, he hasn’t shed much but again that may be due to his still being a kitten. We will just have to be diligent about brushing his coat and sweeping the floor regularly.

Jack has been a boundless source of entertainment for us so far and nothing beats the soothing sound of a kitten purring in your arms. The transition seems to be going well for all of us and Jack appears to enjoy boat life just as much as Missy does, so it looks like Captain Jack will remain a permanent member of the crew. Stay tuned…