Well, it’s been a while again since I posted about our goings-on aboard JOD. That’s largely because, well, not that much has been going on. We’ve been at St Simons Island, GA for a couple of months now, docked at Morningstar Marina. The summer weather here is sweltering; daytime temperatures reach 95 degrees and with the near 100% humidity here on the Georgia coast, the heat index often exceeds 105 degrees in the afternoons. Even a trip up the dock to the marina office to pick up our latest package feels like it completely drains you. In this kind of weather, we mainly stay inside with the air conditioning running and work on our laptops.

We have made a couple of trips home to Huntsville in the meantime. We celebrated July 4th at home with our daughter, grandkids and Cindy’s mom, all of whom reside in our house now. Janice has been doing a lot of work on our back yard, which really needed it, and the results are looking great.

One of our projects while we were home was to assemble a jungle gym/swing set that we bought for our grandkids. It arrived in one large box that contained several hundred pieces and took us a good solid two days to assemble (with only a couple of do-overs), but the results are quite grand if I say so myself. The New Swing Set for Our Grandkids

Cindy and I also flew down to the British Virgin Islands, ostensibly to scout out a good home marina for next year when we plan to take JOD to the BVI, but also to enjoy what is probably our favorite place in the Caribbean. We ate a lot of good food, met some really nice people, enjoyed a lot of great beach time and did also manage in between to check out most of the marinas in the area. We found they were cheaper than the ones in the Bahamas (we fear that the Bahamas are pricing themselves out of the cruiserig market, especially once Cuba opens up) though they are still pricier than the ones in the US.

We also realized that it would probably make more sense to base ourselves out of St Thomas in the US Virgin Islands. If we stay in the BVI, we will have to leave every 90 days and then re-enter the country after a lengthy stay outside (we can’t just cross the border and then turn around and re-enter). Since the USVI is an American territory, we can stay as long as we like. And the USVI is literally a stone’s throw from the BVI so we can still sail them as much as we like.

Our daughter Stephanie came out here to visit us for a couple of days and brought her new Chorkie (Chihuahua/Yorkie mix) puppy Stella with her, She’s adorable! Looks like she weighs all of about 3 pounds. She loved playing with her Aunt Missy but ran off yelping like a scalded dog if she ever got scared by anything.

We’ve also taken the opportunity that this time back affords us to get a little training in for our Missy dog. As sweet and wonderful as she is, we can’t let her off leash because she won’t come back when we call her. On-leash, she pulls like a sled dog, making walks with her a true wrestling match. She had also developed the habit of barking whenever she was outside the boat, something neither we nor our marina neighbors particularly enjoy.

We found a trainer in Savannah (about 70 miles north of here) that uses the same techniques used to train military and police K-9 dogs. They guarantee their results regardless of the age of the dog, so we signed Missy up for their Well-Behaved Dog program. We had our first lesson last week and it went great. The first thing we learned was to not use a halter when she’s on a leash. Halters are designed for pulling loads and that’s exactly what a dog will do when you put one on them. Switching to a collar made an immediate difference in her on-leash behavior (though she stills pulls some…she’s a hardheaded little animal!) We also worked on Come-Sit-Break. The trainer uses an E-collar the functions like a TENS unit for correction. Missy really took to the training and we have been working with her daily several times a day on Come-Sit-Break. She is doing great at it!

This week a friend of ours is coming down for a visit and next week we are driving back to Huntsville for my oldest brother’s 60th birthday. The summer is flying by and soon we will be ready to take JOD back down south to get ready for the jump off to the Bahamas. 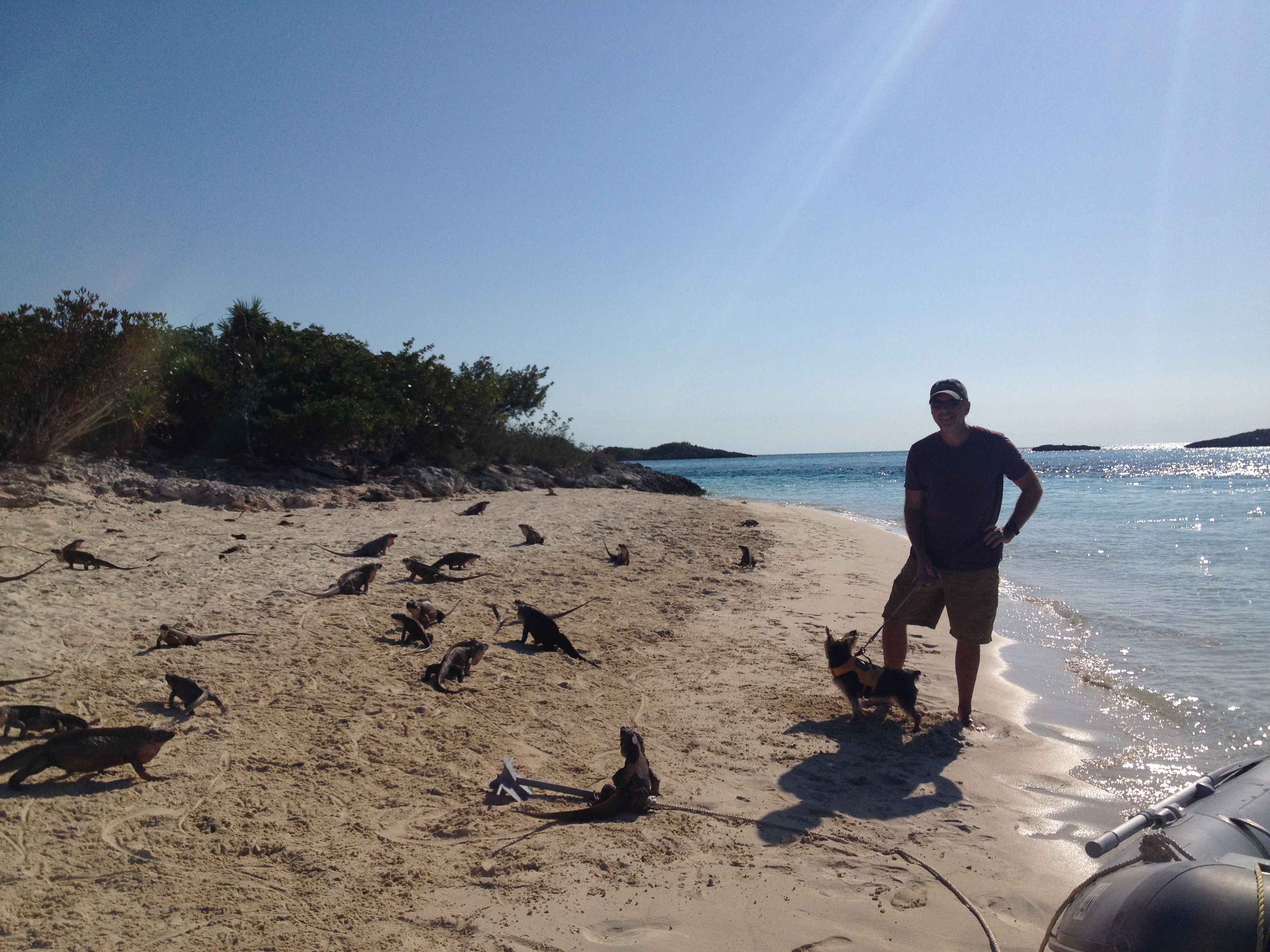 off to see the lizard